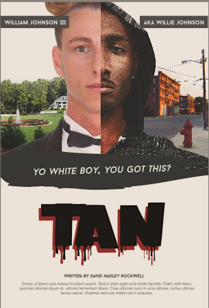 William Johnson III is a 30 year-old single, white, rich Manhattan executive who enjoys the good life of country clubs and black-tie parties that come with executive titles. His three equally rich, blue- blooded friends are born snobs, smugly racist, who blame those less fortunate than themselves (read minorities) for America's problems. They commute daily by train together to Manhattan.

One Monday morning, after a weekend of golf, dinner dances and weed, William is walking from his advertising agency office on Park Avenue to a client to sign a double-comma contract. It begins to rain, and he takes shelter under a bank awning. Suddenly, one of his friend's black pot dealer, also fleeing the storm, joins him. On an impulse William decides to buy some marijuana right there. As the baggie changes hands, lightning strikes the awning pole. There is a huge explosion. William wakes up in an ambulance, and realizes his body is not really burned. He is now inside the body of the black drug dealer, Willie Johnson. He jumps out of the ambulance and returns to the accident scene, to see his former body being taken away in a bag.

Blinky, Willie's drug-dealing partner, is standing nearby. Unaware of the body exchange, Blinky guides the dazed William into the subway and uptown to their Harlem apartment, and begins to refresh his memory on how to survive in this completely alien culture of street crime and drug dealing —and Narcotics Detective Langly, the  most corrupt cop ever. While there, William meets his younger sister Maureen, a 19-year old crack-addicted mother of two small children.

He leaves the apartment in culture shock, and tries calling both his former workplace, and his parents. But those doors are now closed. He meets a black girl on the street who accuses him of giving her AIDS. They fist fight. Then suddenly, he's picked up by the cops and taken to see Langly, who reminds William that his weekly drug money payoff of $2000 is late. Either William comes up with it, or he goes to jail.

After he is dumped back on the streets, William visits his new black mother, and learns more of his family’s troubled past. His father abandoned him, his younger brother died in a drive-by, his other brother is in jail. Sister Bernice visits with her boyfriend Roger, a rap producer, and his sister, the beautiful and sexy 25- year old Janine. William realizes they had hooked up before he became Willie. She immediately becomes attracted again to this “new” Willie. Roger talks about the black man's plight, and rap as an agent of change.

The group goes to a club rap show that night, where William ducks out the back to urinate. He sees two white policemen beating a black man. He gets involved. In the ensuing fracas, William causes one cop to get shot in the foot. He grabs the cop’s gun that has fallen to the ground, escapes, and buries it in Central Park.

Langly's cops again pick up William and take him to Langly, who knows what happened, and demands $15,000 to fix it. By tomorrow. To raise the cash, William has to perform a daring drug caper, which he barely survives. Langly gets his money.

Having had enough of this new life, William decides to change careers. He leaves Blinky’s apartment and moves in with Janine. He tries to get a straight job in the mailroom at a major corporation in midtown. William has the interview, which involves sex with the white HR woman. He gets the job.

William sets up housekeeping with Janine, and they take charge of Maureen’s two babies. His new situation leads to a split from Blinky, who has his own big plans. Langly, however, still wants his weekly nut.

Further intervening on behalf of Maureen, William assaults the dealer who's selling her drugs. Unfortunately, he is working for Langly. Willie is arrested and sent to Rikers. There, he learns about surviving in prison, and from inmates, how the world really works.

William marries Janine when he gets out after six months. They take legal custody of Maureen's kids. Now there's one more loose end to tie up. He videotapes Langly taking the money from him and sends a copy to his home in Staten Island. Langly freaks. He tells Willie he just wants the gun Willie has, and he'll leave him alone. William digs up the gun, and goes to the station house that night. He is not searched on the way in, orders of Langly.

William enters Langly's private interrogation room, where his two flunky cops are counting cash from a female drug informant who is shooting evidence safe heroin. William tells Langly he's quitting the business. Langly takes the opportunity to educate William with a racist diatribe designed to help William reconsider. William pulls out the gun from under his shirt to give it to Langly. One of the cops, who has been busy with the money looks up, sees the gun, and shoots William in the shoulder. William spins around, the gun pointing at Langly. Langly pull his gun and shoots William dead.

Stunned, Langly staggers back to the desk and sits back, right on top of the junkie's hypodermic needle. It injects AIDS-infected blood into his buttocks. Langly screams, turns, and unloads his gun into the unarmed woman as police officers rush into the room.

The next morning William's friends read about the incident in the newspapers while riding the train to work. They decide that Willie Johnson, who they recognize only as their marijuana dealer, probably deserved to die. William's new life has ended. Langly's has just begun.